In Jewish tradition, it is customary to commemorate the death of a relative with an annual ritual. You go to services, and get up at the appropriate time to say a prayer. My father died two years ago today, and I feel like this is my own way of commemorating his life and what he meant to me. This will be the first time I've written of it publicly - I figure enough time has passed that I can say some things that I have wanted to for a long time.

I guess I'll start by saying that I never felt like I knew my father as well as I would have liked. He was sort of a difficult person to get to know. He didn't like to express his emotions publicly, even to family. Also, he very rarely praised people to their faces, although he would say nice things about people behind their backs. Maybe he didn't want it to go to their heads, or possibly it just wasn't his nature. Criticism was much more open - if you screwed up, he would be the first to let you know. This was maddening for me as I was growing up - no matter how well I did, I never felt like it was good enough for him. To some degree, I credit my successes in life to this attitude, but this realization kind of came in hindsight. He expected people to execute to the best of their abilities, and anything less was simply unacceptable.

Despite his overt hardness, my father was a good person who cared deeply about people. His life's work was as an orthopaedic surgeon, and I believe that he chose that job primarily because he wanted to help people and make a difference. His professional specialties were in two areas - fixing scoliosis and removing malignant bone tumors (if you asked him what he did, he would call himself an orthopaedic oncologist). He would take children whose backs were so crooked that they couldn't walk, and give them essentially normal lives. He also specialized in removing bone tumors from peoples' spines, in procedures that could take up to 12 hours. He was good at what he did, and helped many many people. When we were cleaning out his office at work, we found an incredible number of name tags of discharged patients, which he kept as souvenirs. I think that he wanted to remind himself that you can make a huge difference, one step at a time.

For the last ten years of his life, he focused his professional energies on building a state-of-the-art cancer treatment facility at Sinai Hospital in Baltimore. He managed to attract a host of top-notch cancer specialists to work there, simply because they wanted to work with him. The result was the creation of a true center of excellence at an otherwise ordinary hospital, and I hope that it will serve as part of his legacy.

It is interesting how people have hobbies that seem to reflect their day jobs. For my father, that was making teddy bears. Kind of funny that a surgeon would spend his spare time sewing together teddy bears, but he found it cathartic. He would buy old fur coats, and painstakingly convert them into beautiful teddy bears. A number of these bears went to charity auctions or as baby presents, but the most innovative one was Scoli-Bear. He had an medical device manufacturer create scoliosis instrumentation that would fit a teddy bear, and he placed it inside of one of his creations. He then took an x-ray of the teddy bear, with the instrumentation visible. He could then explain scoliosis surgery in a non-threatening way to even the youngest patients. 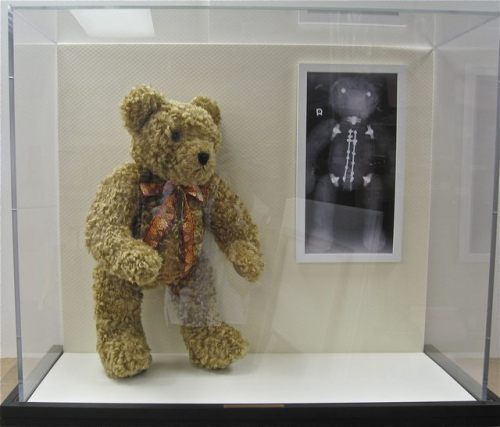 My father also enjoyed biking, a love that I inherited from him. One of the ways we could connect when I was growing up was by going riding together. When I was younger, we would do rides of up to 50 miles on a tandem. By the time I got to high school, he bought me my first road bike. Many of our happiest times were spent riding together on Maryland's Eastern Shore or in semi-rural areas of Baltimore County.

Over time, I began to understand that my father and I were a lot more alike than I had ever suspected. In addition to having a number of interests in common, I realized that our personalities shared many aspects. Just as he was a difficult person to get to know, I can also be somewhat opaque to other people. The ways that he was cryptic to me were very similar to how I was cryptic to others. However, I think I also inherited many of his positive aspects - his ability to diagnose to the root cause. One of his long-time colleagues said that my father was one of the best medical diagnosticians he had ever met. Although I have made my living as a software engineer and not a doctor, I feel like my strongest skills are also in diagnosis. I pride myself on being able to understand just about any system I am thrown into, and when I encounter a software bug, I won't stop until I understand and can resolve its root cause. I guess it makes sense, since I am my father's son - it is funny how you don't notice some of these things until it is too late.

I still remember our last conversation fairly vividly. I called my parents for our normal Sunday evening chat, and after I talked to my mother, she put him on the line. He had just read a book by Clayton Christensen about disruptive technology in the healthcare industry. I have long been a fan of Christensen and The Innovator's Dilemma, so we talked about disruptive technologies on a wider scale. I told him that The Kindle was going to disrupt paper books. When it was time to hang up, I'm pretty sure that I told him I loved him, but I can't quite remember.

About a week later, my mother called me with the news that my father had died suddenly at the age of 61. I still relive the experience every once in a while, and it haunts me to the core. I'm not sure if you can ever get over that - you just sort of move on. Two years later, there is still a pretty big hole inside of me, but I try to fill it by surrounding myself with things and people that I love. But things will never exactly be the same.